Posted by Alicia St Rose in Project Updates on August 8, 2012 | Leave a response

But we’ve made a lot of progress. Much more than our photo gallery suggests. Check out the new photos! These new images are actually from a few weeks ago. We are in the home stretch and now and working non-stop! 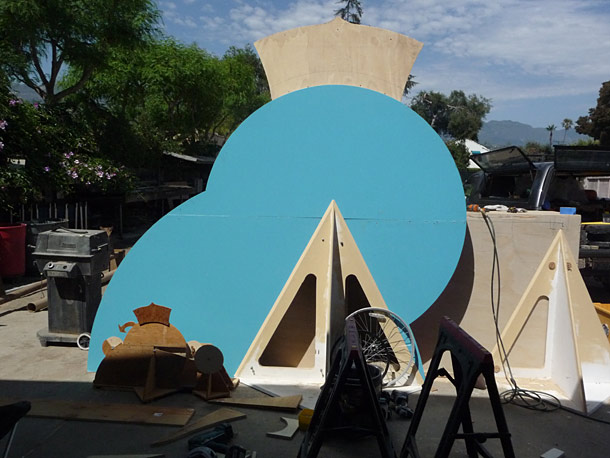 Only 39 Days Until We Pack the Truck!

Posted by Alicia St Rose in Project Updates on July 16, 2012 | Leave a response

Now that the Kickstarter campaign is finished and successfully funded, we can concentrate solely on getting this project to the Playa. I just counted off the days until Michael and I depart as the first leg of the build crew. Wow, only 39 days!!! We’d better make the best of that. Work will be happening every single day until then, with plenty of all nighters in between! 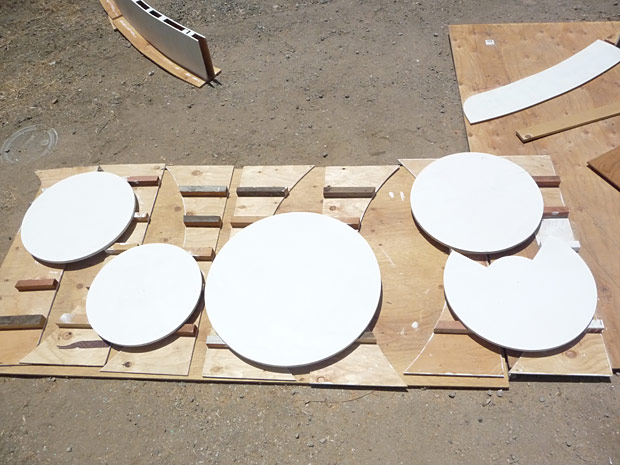 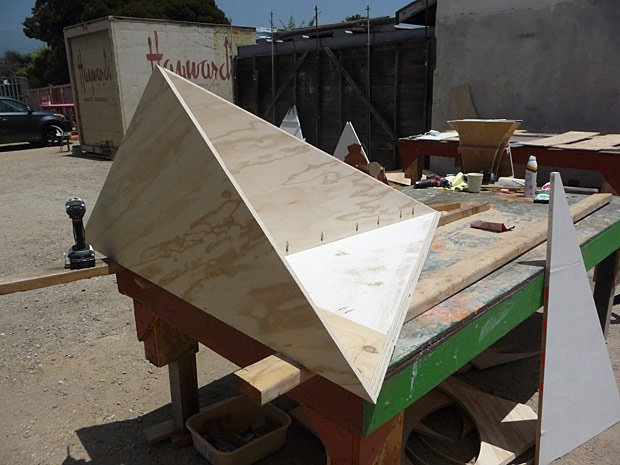 Van is applying his fine carpentry skills to one of the front buttresses. 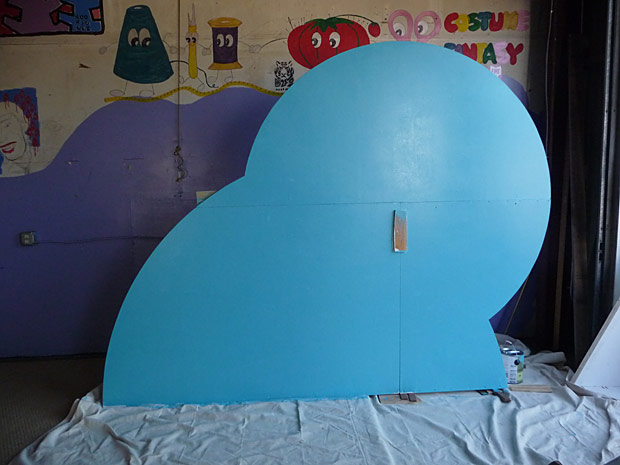 Thank you Jason at Ace Home Improvement Center in Santa Barbara for mixing the exact color of turquoise we needed!!

Ah! Space to stretch our legs

Posted by Alicia St Rose in Project Updates on July 10, 2012 | Leave a response

We’ve been at our dream construction site since Friday, July 6. Thank you Alan Macy! Before that we had to fabricate parts of the Wheel at Van’s house. Now, with all the space we can really get rolling! 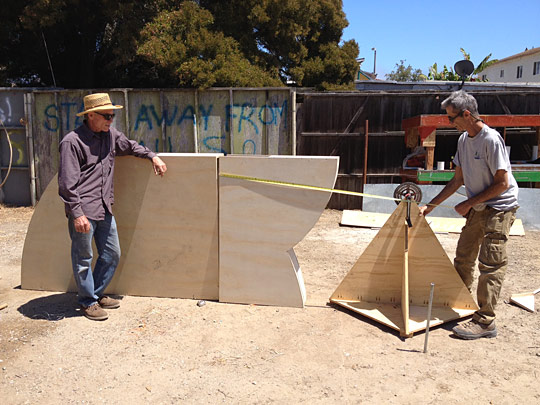 The outer shell is starting to take shape! 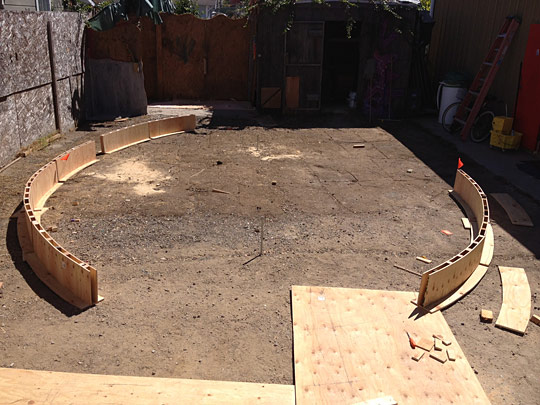 The footprint of the outpost structure is also taking shape! 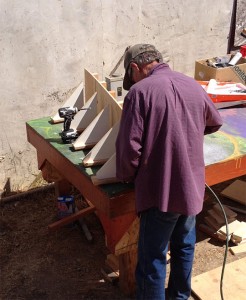 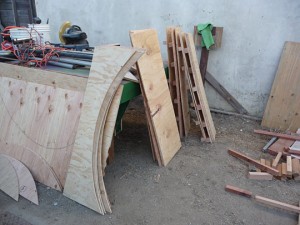 Michael is the architect behind the outer structure. He’s devised an interlocking system for the curved base. The structure will be ovoid in shape and have two entrance corridors.

Posted by Alicia St Rose in Serendipity Tales from the Playa and Beyond on June 29, 2012 | Leave a response

From Steve Marlow, UK, aka “Vlad”

Even more amazing was loosing £3,000 worth of Nikon Camera Kit while I was fucked up on playa. I remember jumping on a mutant hillbilly house on wheels and going crazy only to realize half hour later out in deep playa that I did not have it. I tried for hours to find it and eventually gave up. Some guy was playing guitar in a tent and I went over to have a jam with his spare guitar and my camera kit was there in the chair I was about to sit in. Believe it or not it really happened. Fucking amazing!!!!

Posted by Alicia St Rose in Project Updates on June 27, 2012 | Leave a response

Tonight a few of us on the Serendipity Crew met up to craft some of the Who Ball descriptions. We will need to inscribe 1500 – 2000 wooden balls!

It was a wonderfully fluid process! We paid a visit to Scott London’s Burning Man photo gallery and as each image came up we blurted out what resonated with us. We arrived at descriptions that define Burner according to place, activity, clothing, body adornment. We did not qualify according to race or sex or unchangeable physical characteristics. Any Burner at any time must be able to fit the criteria.

Some read like riddles, still others are open to much subjectivity.

Posted by Alicia St Rose in Serendipity Tales from the Playa and Beyond on June 15, 2012 | Leave a response

A friend in 2010 was gifted what he described as some of the spiciest Bloody Mary he’d ever tasted at a theme camp.

As he walked away a few minutes later, his mouth reeling, completely by chance and without them knowing what he was going through, someone came by and offered him a frozen smoothie which was the perfect antidote.

We have launched! Yes!

Posted by Alicia St Rose in Project Updates on June 15, 2012 | Leave a response

Amazon has graciously verified my bank account in less than 36 hours, Kickstarter gave our project the green light in less than 12 hours. I have successfully  launched my first Kickstarter campaign. Let’s make this happen. The Serendipity Outpost will be an awesome gift to the Playa!

Posted by Alicia St Rose in Project Updates on June 14, 2012 | Leave a response

I’ve been working for a few weeks now on creating the Serendipity Outpost Kickstarter campaign. Making a video, creating wonderful pledge gifts, etc. Today I clicked the “Preview and Submit” button only to be informed that my Amazon Payments account hasn’t verified my bank. I thought I’d taken care of this back in May. Now it looks like it won’t be verified until the middle of next week.

As you can imagine, I was pretty disappointed. But it is what it is. Today just isn’t the day to send that campaign on to Kickstarter, apparently. So I’ll accept this mystery gift of a setback and see where that leads!

One thing is for certain: We’ll have to come out of the gate running and the campaign will be short and sweet!

Humble Beginnings of the Serendipity Outpost

Posted by Alicia St Rose in Project Updates on May 29, 2012 | Leave a response

The Serendipity Outpost is my brainchild. It will be the first art installation I’ve brought to the Playa. I’ve worked an past projects, most recently, Walkabout Woods in 2011 and Galaxy on a Stick in 2009. But this is the first time I’m spearheading a project. I hope to chronicle the progress on this blog.

The man burns in 94 days. So the Serendipity crew has a little over 2 months to pull this off. The process so far has been very serendipitous as it should be. The right people are joining the crew at the right time. Anything that appears to be a setback is actually a gift. 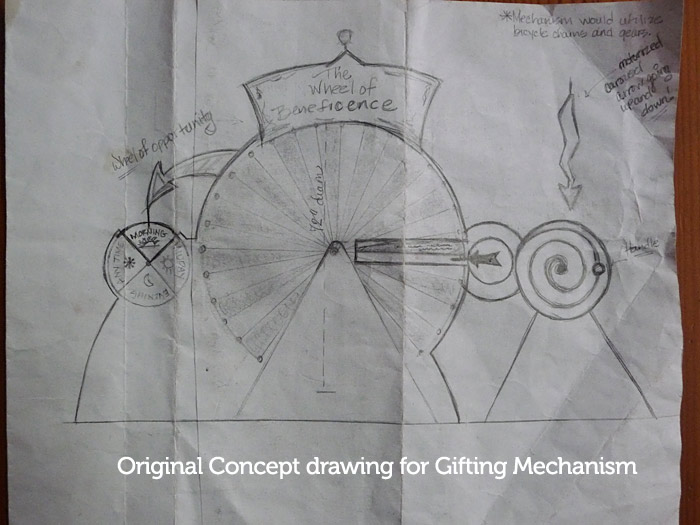 Here is my original quick sketch of the Serendipity Outpost. I tried to capture some of the whimsy. You can also see how the names of the wheels were a bit more ostentatious. 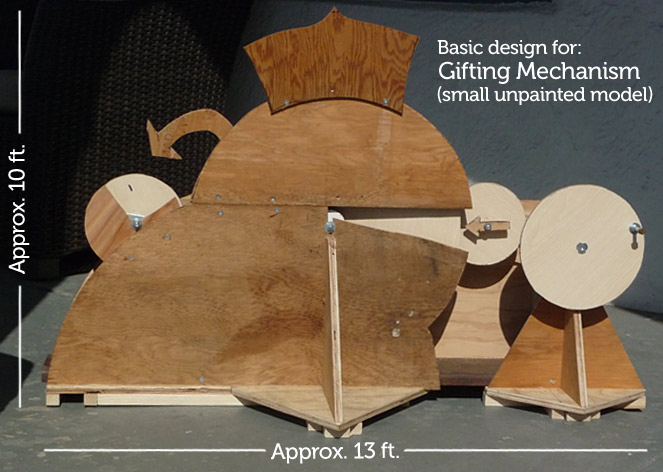 Van Granaroli made this small scale model that actually spins. He used large rubber bands and simple pullies made of wood. 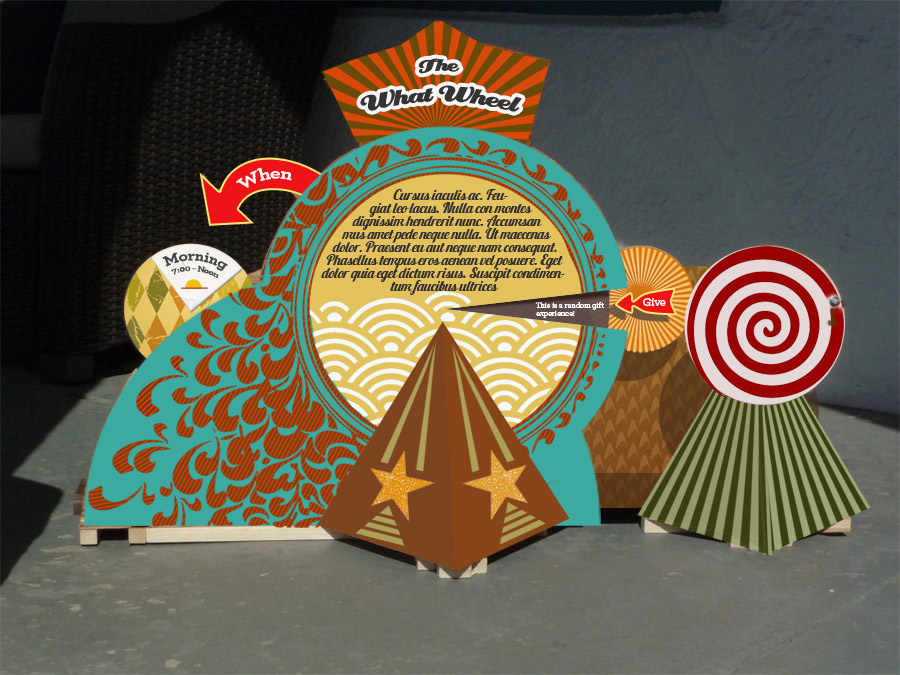 I spent some time in Photoshop working out a design concept overlay on the previous photo. Not a bad start!